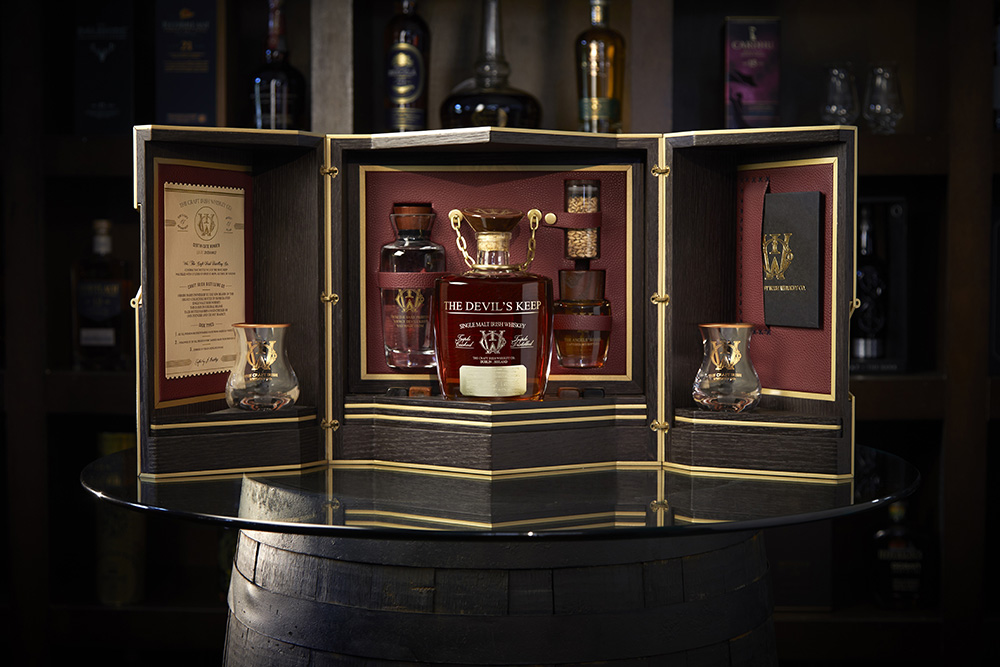 Craft Irish Whiskey Co. has marked the release of The Devil’s Keep, a limited-edition run of 333 bottles of triple-distilled, 29-year-old single-malt whiskey set in a bespoke case. The release has already achieved a significant milestone as the most expensive inaugural whiskey release ever at auction, selling for close to £46,000 (US$60,000) earlier in November.

Rare collectable whiskey was showing significant investment growth pre-pandemic, with the 2020 Knight Frank Wealth Report Rare Whisky Index, released in March, showing a 586 per cent increase in the value of rare Scottish single malts over the past 10 years.

Likewise, Irish whiskey value has shown strong growth, with IWSR reporting it as one of the fastest-growing spirits categories in the United States, fuelled by a surge of new premium brands and distilleries. Craft Irish Whiskey Co. is one such company looking to put luxury rare Irish whiskies more firmly on the map.

What is your experience in the whiskey/spirits industry and what was the motivator for starting The Craft Irish Whiskey Co.?

Growing up around pubs and bars gave me a deep level of understanding of the drinks industry. I went on to own whiskey bars, having also had a career in furniture making and as a BBQ pitmaster. This gave me a real affinity with wood, allowing me to understand the taste and flavours it creates, which is a key element in the whiskey-making process.

My father was a serial entrepreneur who came from a long line of serial entrepreneurs, with the main business centred on a chain of butchers’ shops. He implicitly understood seasoning and flavour combinations; the Bradley kitchen table was a masterclass of flavour and a temple to the five senses.

A few years ago, my father sadly fell ill, and he became my priority. It was over a late-night whiskey while fantasising with my father, that the foundations of my whiskey companies began to form. He used to say that Irish whiskey was consistently better in taste and quality than other whiskeys, and so – coming from a country that has strong roots in whiskey-making – I decided to build on our dream of creating a premium Irish whiskey brand by launching The Craft Irish Whiskey Co. in 2015.

I read a book called Truths about Whisky, published in 1879. I devoured books and insights from business gurus like Tony Robbins, Jim Collins and Michael Gerber to fully grasp the business theory and it was from there that my idea started to grow into a reality.

Can you explain the history of The Devil’s Keep?

It’s not well-known that Ireland actually invented whiskey in the 14th century and dominated the sector. Due to a set of unfortunate geopolitics, Irish whiskey suffered a decline. However, with The Devil’s Keep, we are hoping to reintroduce Irish whiskey to the world stage. There has always been a gap in the market for ultra-luxe Irish whiskey, so my intention is to fill this gap with The Devil’s Keep and to live up to Ireland’s traditional gold standard of triple distillation that was set in the 1800s.

The finished product is the result of two-and-half years of painstaking research, development and craftsmanship. It was born a stone’s throw from the Giant’s Causeway in County Antrim, back in 1991 when there were only four distilleries in Ireland – and even less than that made single malt.

For the last 20 years, Irish whiskey has grown in double digits, with more than 12 per cent growth every year. Jameson has been a trailblazer for the Irish whiskey world but now other brands are coming up behind, so Irish whiskey is one of the fastest-growing in the spirits sector. Secondly, the older it is the scarcer it is – and of course, the Irish invented whiskey.

What are the unique attributes of The Devil’s Keep, compared to rare whiskeys from other regions?

What makes The Devil’s Keep different is that it’s triple distilled, Irish and the oldest Irish whiskey ever released that is a single malt. Beyond this, the case that contains the bottle holds all the different components within it to create the perfect whiskey tasting experience. No detail has been overlooked to create this multi-sensory experience, from the barley that has been sourced from the same malting house that housed the original barley for the whiskey, through to the carafe filled with water sourced from the Antrim hills, which was also used for the original whiskey. There are obsidian whiskey stones and a custom-design pipette that can be used to apply the water precisely to release the micelles and the flavours.

Then, of course, there is the specially designed whiskey glass that amplifies the flavours and which you can’t buy anywhere else. Finally, the special ‘angel’s share’ atomiser has been included, which captures the unmistakable aroma one gets as you walk through the halls of a whiskey warehouse full of maturing whiskey – this has never been attempted before.

The Devil’s Keep also has a unique distillation process – the difference this makes is dramatic; triple-distilled whiskey is much smoother than double-distilled. The Devil’s Keep has been poured into premium 200-litre ‘first fill’ American oak casks which had previously stored bourbon, then finished in rare 100-litre French oak barrels that held tawny port, before a final finish in virgin Hungarian oak for 12 days. This triple-distillation, the high wood-to-spirit ratio in the smaller barrels and the use of a ‘first fill’ cask is what gives The Devil’s Keep its luxurious smoothness, complexity, colour and rich flavour profile of caramel, maple syrup and vanilla.

What was the thinking behind the box design?

Because we partnered with Michelin, I wanted someone to have the perfect whiskey to be enjoyed after dinner; this was our primary concept for the design. I wanted it to be a multi-sensorial experience – for someone to taste The Devil’s Keep, to smell the barley and the angel’s share and of course for it to be visually striking when opened. No one else has gone to such lengths to create the perfect whiskey experience. The bottle of Devil’s Keep itself is guarded within two custom-locked cases, secured by a bespoke brass Japanese-style lock, and the bottle – designed by Tiago Russo – is held by a chain which has to be unleashed. This all plays with the idea of locking away the Devil.

What changes do you anticipate seeing in the whiskey market over the next five years?

I see Ireland being a world leader in ultra-luxury whiskey. Winning best single malt the past two years has put Irish whiskies firmly in the spotlight and the quality and depth of the industry mean it is set to take advantage of that.