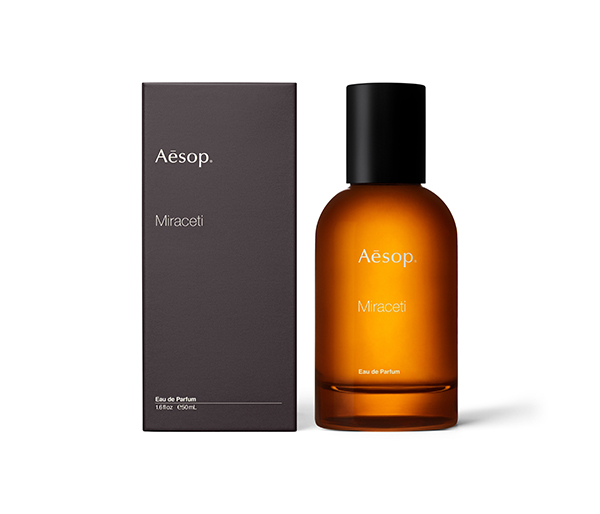 The fragrances, Miraceti, Karst and Erémia, are presented in amber bottles that are typical of the brand’s minimalist design aesthetic. Fillion was said to be inspired by a ‘journey through spaces’ and the juxtapositions found within certain environments when creating the new scents.

‘These liminal spaces, these worlds within worlds, have been a fount for artists, thinkers and wordsmiths such as Tarkovsky, Bachelard and Melville,’ said Suzanne Santos, Aesop’s Chief Customer Officer. ‘Why? Because they spark the senses. They make us engage, ask us to look differently, and, ultimately, encourage us to imagine, which is what we seek in every interaction at Aesop.’

‘A smell, whether in the air, on our skin, or on our clothes, transports us elsewhere to worlds both real and imagined. A window into nature, so to speak, one that invites a dialogue with the surroundings we inhabit but often overlook’, added Fillion.

Accentuating the serenity and savagery of the sea, Miraceti contains notes of labdanum to recall ocean-worn wood, incense and seaweed, and ambrette and styrax to lend musky, spicy tones.

Karst, inspired by the shoreline and the way in which it is shaped by the tides, features cumin and sandalwood to evoke warm, spicy and smoky notes.

Aesop has partnered with the Italian digital artist Quayola on an exhibition for the launch, which sees immersive, digital artworks that are inspired by the landscape paintings of the Impressionists, as well as the new scents.

Lalique walks on the wild side

Bond No. 9 to launch NoMad fragrance