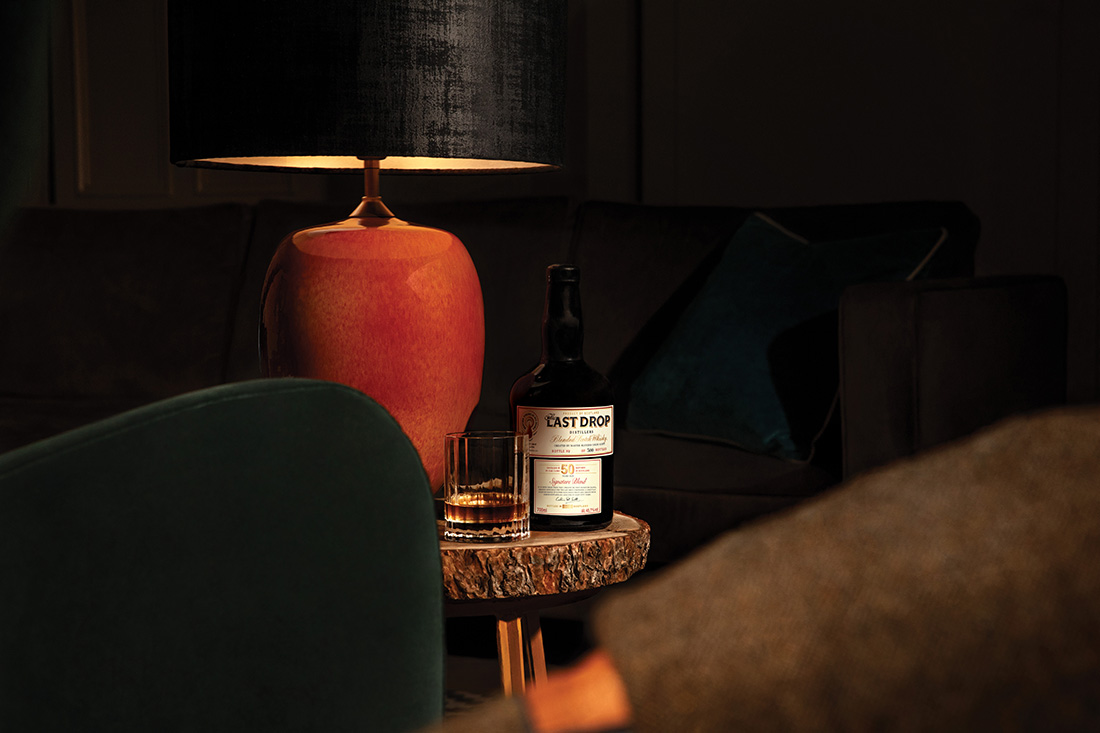 Founded by two icons of the drinks industry, The Last Drop has garnered a reputation for sourcing some of the world’s finest rare spirits for its enthusiastic customers. Belinda Craigie tracks the company’s remarkable journey as it ventures into new territory by transforming from curator to creator.

There’s a chocolate brown liquid in my glass that, when held up to the light, holds hints of crimson that are reminiscent of a pinot noir. Up wafts sweet notes of caramel, spiced fruit, and coffee; a Christmas cake in a glass. There’s a tanginess present that lends balance to the deeply sweet notes.

The liquid – a Very Old Tawny Port – also happens to be more than a century my senior. Produced in 1870, the port is one of two examples of old Colheita (single estate) port from the Baixo Corgo region in Portugal’s Douro Valley. Its pair was made 100 years later in 1970 by the same family, from the same vineyards. Together, they represent expressions of winemaking from pre- and post-phylloxera periods. (Phylloxera is a louse that decimated much of Europe’s vineyards in the late-19th century). These sets, limited to just 770 units, represent a rare opportunity to sample two ports created from the same vineyards, yet within significantly different historical contexts.

Rarity and quality are the hallmarks of The Last Drop Distillers, a curator of remarkable and limited-edition spirits that launched the port duo as its 11th release. The company is the result of a passion project started in 2008 by two prolific drinks industry figures, Tom Jago and James Espey OBE. Among their impressive, combined career feats, Tom and James developed Baileys Irish Cream – which went on to become the world’s best-selling liqueur – as well as Johnnie Walker Blue Label, Le Piat D’Or, Malibu Rum, The Classic Malts and Chivas Regal 18 Year Old. James also founded The Keepers of the Quaich, the illustrious society that celebrates the Scotch whisky industry.

In 2014, Tom’s daughter, Rebecca Jago, and James’ daughter, Beanie Geraedts-Espey, joined the business to help carry it to the next level. Now the company’s managing director, Rebecca initially used her creative background to help with the packaging design before deciding to join in a more permanent capacity. She says that the chance to grow a very niche business alongside Beanie, while continuing the heritage that was started by their fathers, was a compelling factor: ‘I think it was quite opportune for the two of us to join, together. I don’t think we felt we were doing it for them, but their influence was a huge part of why we joined. It was this sense of, we don’t want this to just fade away. The respect for what they had done was a huge motivator.’ In 2016, the company was bought by the privately-owned spirits company, Sazerac.

The Last Drop’s first release was a 1960 Scotch whisky blend from three casks, which were discovered in a Lowland warehouse by Tom and James using their extensive industry connections. The second release was a 1950 Cognac, sourced from a small distillery in the French countryside, where it had aged for 60 years in the barrel. In the 13 years since its inception, the company has launched just 22 releases (fewer than 10,000 total bottles) ranging from Scotch whisky, Cognac, and recently, bourbon and rum. What is perhaps most evident in these distinctive releases – aside from a consistently delicious taste – is their accompanying narrative. Each is thoughtfully decorated with a compelling story delving into its provenance, discovery and how it was made.

Release number 14, for example – a Grande Champagne Cognac from 1925 – came from a single barrel of Cognac, hidden during the German advance through France during World War II. It was uncovered behind a false wall of rubble in 2017 by the grandson of the Cognac distiller who placed it there – concealed for 70 years and approaching a century in age. It is these tales tied to the bottle that lend a feeling that you are, in a sense, tasting a piece of history.

‘It’s part of the world we’re weaving or giving an insight into; if the liquid in the bottle is the hero, then everything that surrounds it is just making it more of a hero’, explains Rebecca. ‘Whether it’s the distiller or the barrel or where it was stored and found, all of that is leading you to the golden liquid if you like.’

Ultimately, customers adding a new layer to these stories with their own memories is what gives the bottle even more significance. Rebecca offers an example of a customer who wrote to tell her the story of who he was with and why when he opened each of the six bottles he’d bought over the years. ‘It sent shivers down my spine because it was such a direct connection … I think it’s memories rather than the stories themselves; it’s that moment when you first tasted something’, she says.

The Last Drop is now beginning a new chapter, by transcending its role as curator into that of creator. Recently, the company released its first signature blend, a 50-year-old Scotch whisky created by master blender, Colin Scott. Colin joined The Last Drop following a celebrated career at Chivas Brothers where, alongside Tom and James, he created Chivas Regal 18 Year Old.

Colin has also been appointed as a founder member of The Last Drop’s newly formed panel, The Assembly. The panel unites six industry experts across spirits categories (covering Scotch, Cognac, rum, and American, Irish, and Indian whiskies) who are aligned with the brand’s passion for sharing knowledge, wisdom, ideas, and innovation. It’s a place for conversation, explains Rebecca: ‘That sense of conversation – which also goes back to the storytelling and the way we talk to our customers – was always very much at the heart of The Assembly. This was not a specifically commercial initiative; it was much more celebratory than that … I think the way that the idea was received by the six founder members clearly indicates that it’s something worth doing. Their immense pleasure has been a joy to behold.’

Rebecca’s sights are now set on future-proofing the business that was started by her father and, with a team of experts on hand to lend their knowledge in creating exceptional spirits, The Last Drop’s next chapter will perhaps be its most exciting one yet.