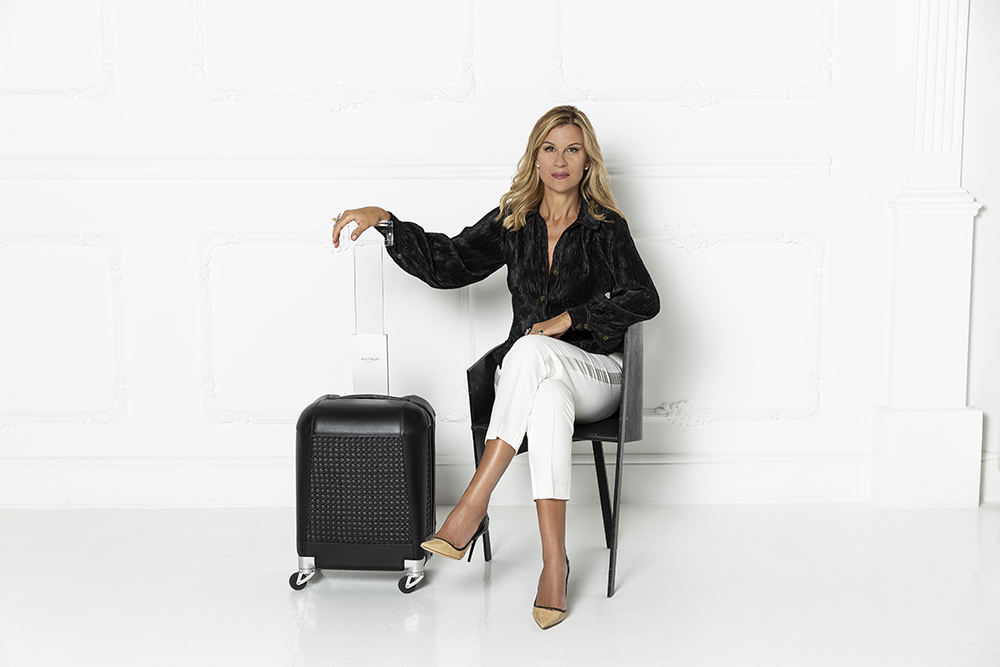 A family legacy rooted in luxury and a luggage market defined by logos sparked Patricia Gucci’s quest to launch a lifestyle brand that puts craftsmanship, style and heritage above all else, writes Belinda Craigie.

Patricia Gucci is hardly a stranger to the world of luxury. Her family name happens to be synonymous with one of the biggest fashion houses in the world. In 1921, Patricia’s grandfather Guccio Gucci founded leather goods shop G. Gucci & Co. in Florence. Together with his sons, including Patricia’s father Aldo, Gucci expanded the business to open stores in Milan and Rome. The brand went on to become a popular shopping staple among the jet-set and, ultimately, one of the most coveted luxury fashion brands today.

Patricia gained first-hand experience learning the intricacies of thoughtful design and business. Raised and educated in England, Italy and Switzerland, she relocated to the United States in the 1980s where she joined Gucci as a retail merchandiser responsible for window displays and then worked as a fashion coordinator. ‘It was a lot of fun’, she says. ‘I directed fashion shows, worked with up-and-coming New York artists and it really gave me an opportunity to see different sides of the business.’ She became a roving ambassador for the brand in the US and Asia and in 1982, Patricia became the first woman to be appointed to Gucci’s Board of Directors.

With her latest venture, Patricia intends to fill a gap in the market for design-led travel luggage. Aviteur, stemming from the Latin ‘avis’, for bird and ‘voyageur’, alluding to the spirit of travel, was launched at Paris Fashion Week in 2019 as an antidote to a luxury goods market saturated with logos rather than innovative, sophisticated design.

With her family’s heritage an undeniable influence on the development of the brand, Patricia points to her unwavering attention to detail, an attribute inherited from her father, forming the DNA of Aviteur.

‘He was a perfectionist and so am I. Making a luxury product also has cost implications, especially when they are handmade, 100 per cent made in Italy. Some customers have baulked at the price of our carry-on but here, too, I am reminded of my father’s quote: “Quality is remembered long after price is forgotten”’, she says.

Aviteur’s carry-on leather luggage cases are handmade in Italy ‘right down to the screws’, from a network of suppliers located within a 250-mile radius, spanning Tuscan leather tanneries to Venetian wheel manufacturers, according to Patricia. Reflective polycarbonate panels are covered with Paglia di Vienna interlaced leather in walnut, black or grey. The inside of the case is lined with Alcantara and features hidden compartments for storing valuables or accessories. ‘I liked the idea of combining traditional materials with industrial components, such as the wheel casters forged from aviation-grade aluminium’, says Patricia.

Special commissions are available for those wanting something unique. For example, a bespoke all-black carry-on was debuted at Le Cabinet de Curiosités in the Hôtel de Crillon to mark Aviteur’s launch, which featured the hotel crest at the base of the handle. A limited-edition series with matte gold hardware has launched on Net-A-Porter, and the brand is working on a collaboration with a new stockist: Harrods. Also on the horizon are six new carry-on colour options, a weekend bag in two sizes and a range of leather and soft accessories which will be added to the Aviteur range in 2020.

‘Above all, I wanted something that was cutting-edge,’ says Patricia. ‘We’re constantly on the move, yet walking through airports, the luggage you see is generic, with no real personality. A carry-on should be no different than a designer handbag or a briefcase. When you get home, you shouldn’t feel like it has to be hidden away.’

Perhaps the most innovative design feature of the Aviteur carry-on is its button-less handle, which Patricia describes as ‘a work of art’. Hand-carved from a block of translucent polycarbonate, it has a patent-pending mechanism developed by an engineering firm in the aerospace sector, which enables the handle to seamlessly emerge and retract.

It is apparent that Patricia’s vision – to create sophisticated lifestyle products that champion traditional principles of design, craftsmanship and quality – echoes that of her grandfather when founding his eponymous brand nearly a century ago. ‘I want my products to speak for themselves, to reflect one’s personality and individuality without being an advertisement for something else,’ she says. ‘To be first with something original leaves a lasting impression.’