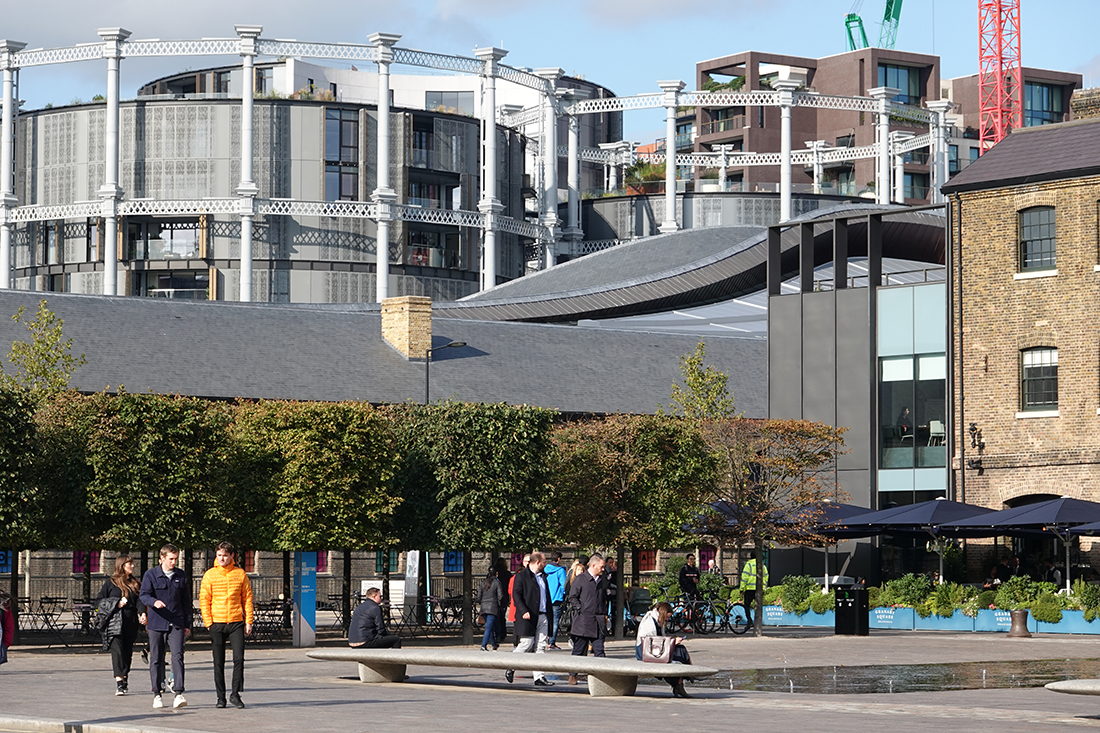 Those luxury and aspirational brands heading beyond the traditional locations of Mayfair and Knightsbridge have, in the last three or four years, options within the East End and King’s Cross.

Usually called the ‘East End’, the historic core of East London lies east of the medieval walls of The City of London financial district and north of the Thames. In comparison with the West End and Knightsbridge, there is no historic, dominant custodian landlord. The East End began to emerge in the Middle Ages, with slow urban growth outside of the eastern walls of the capital, which later accelerated, especially in the 19th century.

One of the major themes of the East End history has been migration, attracting the rural populous from other parts of England and further afield; Huguenot refugees (who created the new suburb of Spitalfields), Irish weavers, Ashkenazi Jews and, in the 20th century, Bangladeshis.

The World War II Blitz of East London (targeted because the area was the centre for imports and the storage of raw materials for the war effort), accelerated post-war development, and the closure of the East End docks in the Port of London in 1980 led to large-scale regeneration.

The East End is reputed to have more markets than anywhere else in Europe, with the markets’ histories spanning four centuries. Now, the numerous pop-up clothing markets operate at the weekends within redundant buildings, properties identified for redevelopment and, of course, the historical markets around Petticoat Lane and Brick Lane.

Old Spitalfields Market is a covered market in the East End. There has been a market on the site for more than 350 years and, following the relocation of the vegetable market to New Spitalfields Market, the area has developed into a more commercial environment. In July 2015, private property company Tribeca Holdings became the sole owner of Spitalfields Market.

In addition to the covered market, there are 120,000 square feet of shops and an eclectic mix of food stall offerings and restaurants. Nine million visitors per year are attracted to the location, directly to the east of Liverpool Street Station and the Broadgate development. The target demographic ranges from city workers to local residents, foreign tourists and international visitors. The audience nationality reads like a global A-Z. Chanel, Benefit, M.A.C, Diptyque and Deciem have opened fragrance and beauty boutiques adjacent to & Other Stories, Rag & Bone, Belstaff and Dr Martens. Whilst not apparent to the casual visitor, the area is actually owned by two separate landlords. ‘Spitalfields’ sits adjacent to the old market, closer to Bishopsgate. The retail benchmark is much the same, although the food offers are more commercial, in the style of Leon, The Grocer, Giraffe and Itsu.

In the 1990s, the government established the King’s Cross Partnership to fund the area’s regeneration. A development around King’s Cross mainline station includes shops, offices, restaurants, Google’s UK Headquarters and part of Central Saint Martin’s College. King’s Cross, St. Pancras Railway Station and Eurostar have some of the highest footfall traffic for stations across London. The Kings Cross Central Development includes 4 hectares of open space, 2.6 hectares of new public realm, along with Regents Canal and a towpath to Camden Market and Regents Park. Google is building its home for 7,000 staff (870,000 square feet), while 500,000 square feet of shops, restaurants, bars, and leisure activities will attract a projected 10-12 million visitors per year. The retail mix within Coal Drops Yard is much more eclectic in comparison with Spitalfields, although international brands Paul Smith, A.P.C, American Vintage and Cos have opened within the former railway arches. Barrafina, Casa Pastor, Dishoom and quirkier independents provide the complementary food offer.

Landlords to both of these ‘new estates’ have spent considerable time (and money) devising comprehensive marketing and PR strategies to attract visitors and help develop the footfall. In both locations, entry costs are relatively modest from circa £75,000 per annum, to circa £200,000 per annum for a prime located boutique. In the same way that Capco and Shaftesbury curate Covent Garden and Seven Dials respectively, the retail selection process seeks to identify emerging brands to sit alongside their established international neighbours. Whilst these estates for the 21st century are still evolving today, there is a realisation that majority ownership of an area can enable an effective, coordinated management and leasing approach, much in the same style as the successful Howard de Walden Estate (Marylebone High Street), Mayfair (Grosvenor) and Knightsbridge (Earl of Cadogan).