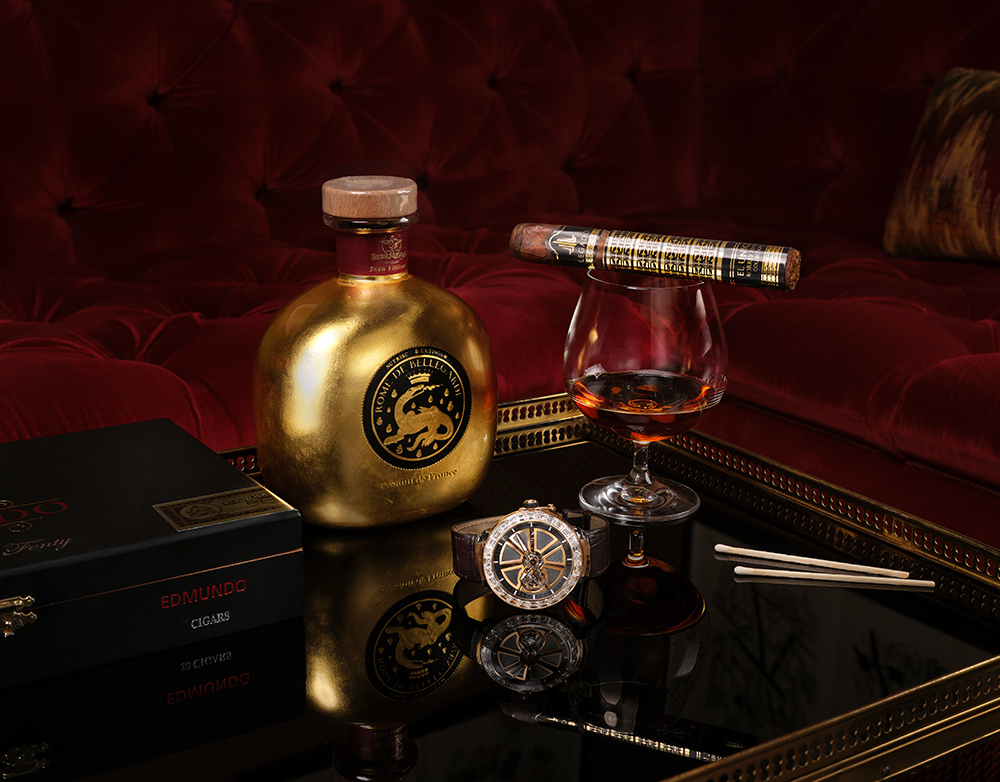 Legado, a new cigar brand co-founded by Rorrey Fenty (brother of Rihanna), is set to make its debut in London. A private launch event will take place on Thursday 10 October, at which four collector boxes will be auctioned – each containing special editions of the ‘New World’ cigars, alongside timepieces by Fabergé and rare bottles of Rome de Bellegarde cognac.

‘London is one of my favourite cities. Its great diversity and position as the cultural capital of the world make it the perfect setting for Legado’s global launch’, said Rorrey.

Each box, handcrafted by Gemma M. de Ana, has been named and themed around the heritage of the collaborator brands. The St Petersburg box (pictured above) contains the Fabergé Visionnaire dual time zone watch with 38 baguette diamonds (totalling 9.5 carats), alongside the only two Legado ‘El Unico’ cigars in the world. Completing the box – which is designed to reflect the Russian history of Fabergé – is a bottle of 1894 Rome de Bellegarde cognac. The rare cognac is available only in 67 bottles, each plated in 24-carat gold.

Josina von dem Bussche-Kessell, global sales director at Fabergé, said that the collaboration was born from the shared values of the brands as well as a desire to integrate its past and present.

‘All our brands share a joint appreciation of history, legacy and the honour and responsibility that comes with this. We also share a current quest of wanting to address our past in a modern and contemporary way. All three industries are full of notable historic milestones, but we wanted to do something together which could highlight a poignant moment in time.’

David Smeralda, the co-founder of Rome de Bellegarde, added: ‘despite being different, our stories and identities are very similar in many ways … we are very creative in our approach and very similar in our desire to become the world’s best in our respective industries.’

Inside the Cognac box – named for Rome de Bellegarde – is the Fabergé Visionnaire I, the last of a limited series of 15 Flying Tourbillon pieces featuring 28 baguette diamonds. Named for Legado, the Barbados box (pictured below) and London box – named for the meeting place of the three brands – also both contain different versions of Fabergé’s dual time zone watch, coupled with two different Peacock watches. The three boxes also contain a bottle of Rome de Bellegarde and two Legado ‘Renaissance’ cigars.

Legado cigars are blended and hand-rolled by Cuban master-blender, Jose Matias Maragato, in the Dominican Republic. The brand has expansion plans in the pipeline, with Rorrey teasing ‘a full luxury lifestyle experience’, including apparel, cigar lounges, a line of spirits, and further brand collaborations.