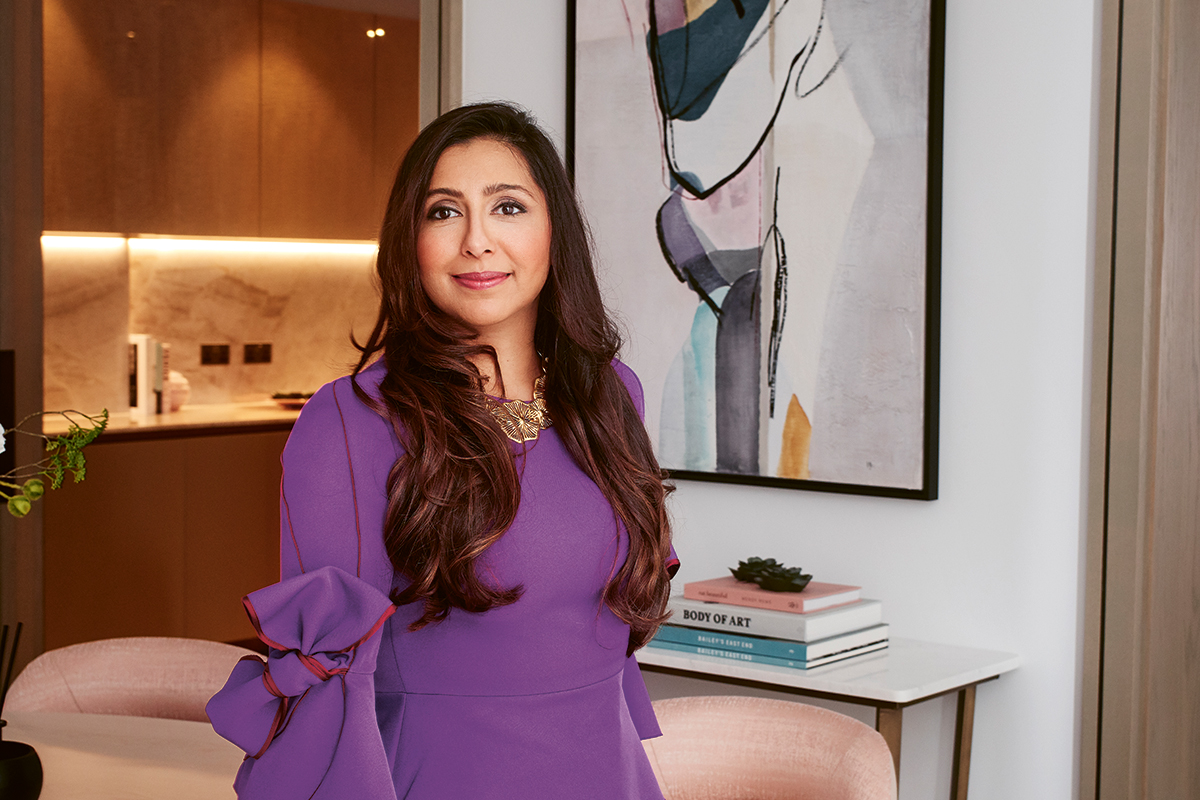 Interiors studio Elicyon is in the business of creating interior couture for its discerning clients, with the pursuit of the beautifully bespoke at its heart, as Belinda Craigie writes.

This story was originally published in Luxury Briefing issue 215.

Founded in 2014, Charu Gandhi’s boutique interior design studio Elicyon is leading the charge in creating beautiful spaces for its clients around the world. The studio has contributed its considerable creative prowess to private residences in London, Dubai, Singapore, Hong Kong and Mumbai; with its multi-faceted team of interior designers, architects and project managers creating unique spaces at some of the world’s most elite addresses.

While the main focus is on interior design, Charu’s formal training in architecture formed the basis of Elicyon’s journey. It all started with a childhood mentor Charu met when her parents decided to build a home in India. Fresh from working in Florence, Sujata Kohli was enlisted as the house’s architect and she encapsulated an ambitious ideal in combining a scientific, analytical mind with a tendency toward creative projects. ‘She would walk around onsite and instruct these construction teams and I was just very enamoured of her. She’s still a mentor of mine.’

Sujata encouraged Charu to visit the Architectural Association in London, which led to seven years of formal training. Positions with big-name design houses followed including Allies & Morrison Architects in 2006, where she honed her experience working with luxury residential clients, as well as contributing to largescale projects like the Doha National Library and the London Olympics Masterplan. While the allure of architecture was all-consuming throughout her youth, Charu says that in practice the vocation didn’t give her the satisfaction she’d expected, in part due to its tendency to be overly-analytical.

‘I was critical of the fact that everything had to be post-rationalised. Everything had to have a gravity to it, which I feel interior design doesn’t overly do. It doesn’t complicate. In architecture, you can’t say something is beautiful for the sake of being beautiful, it’s too blasé and surface-level and architecture tends to think more intellectually than that.’ It was a failed application to develop the Brighton Marina, followed by a tedious appeals process and an ongoing sense of dissatisfaction that saw Charu pursuing a new career path.

‘I thought I would leave design and become an investor. I was planning on going to business school, and I got into a school in France, but at the same time a friend of mine who worked at [interior designers and developers] Candy & Candy had rediscovered her love for design and convinced me to apply.’

A rigorous application and interview process led to a successful placement as a project manager for the private commissions team, and Charu went on to work across projects in India and Africa, as well as residences in the prestigious One Hyde Park development in London. A connection at One Hyde Park was the catalyst for Charu’s decision to start her own business when she was offered a refurbishment project in the development.

‘I wasn’t planning to set up my own studio, my father’s an entrepreneur and I’ve seen the good and the bad. I had always intended to be employed externally. But, I found that I always came to a similar point in my previous jobs where I was happy working on my own.’

In a six-week whirlwind move, Charu pulled together offices, a team and came up with a name – Elicyon – and began work on the refurbishment at One Hyde Park, a project where she finally found her niche. The pursuit of the beautiful and creating an emotive response for her clients underpins what Elicyon stands for – an objective that was harder to achieve in the more structural and formal practice of architecture.

While the focus is on bespoke pieces that fit with the vision of the studio’s clients, Charu is disillusioned by the current tendency to elevate the heritage and story of something over its aesthetic in a purer form. ‘I feel no shame in saying that I’ve chosen something because it’s beautiful and I don’t think that everything has to have a heritage. Sometimes the journey of just making something beautiful is more of a story – I think the pursuit of beauty is a story in itself.’

Charu’s working approach tends to veer toward the more conceptual and she’s a firm believer in design and creativity flourishing within a structural framework. The team’s process is very much journey-based, and it’s one they’re constantly refining based on the client brief and the overall concept. ‘We want them to fall in love with design, with craft, to have a sense of self-actualisation.’

It’s a structured conceptualisation with a stringent set of checklists that are utilised to review the project’s bespoke pieces. Charu admits that sometimes, she gets it wrong, but believes the only other option is to play it completely safe. She’s practical in her approach and frank in her assertion that there’s no point in showing a client a bespoke piece if it’s not within their budget. ‘Sometimes that means we might not see that client again, but that’s better for them and better for us. We are very upfront about the costs a client should expect.’ 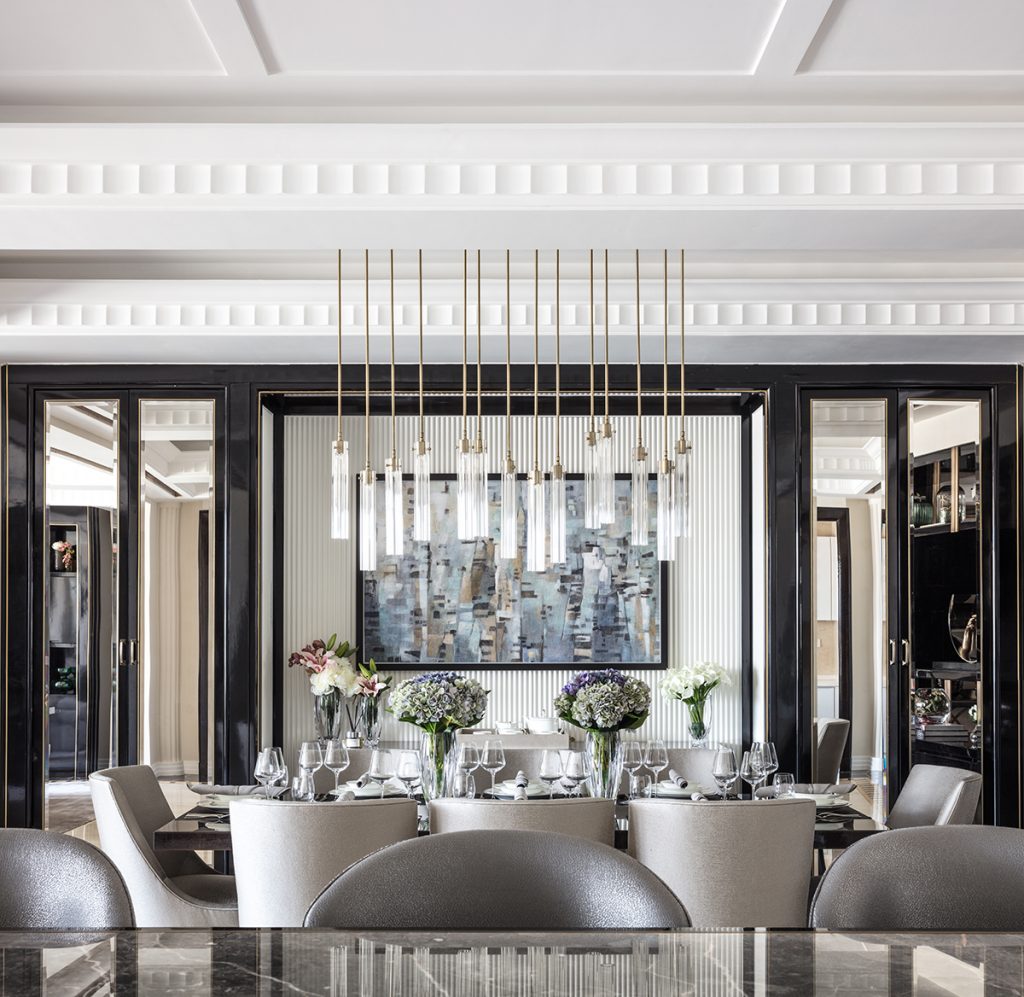 The studio takes a collaborative approach and is discerning in its selection of manufacturing partners. Elicyon works closely with specialist companies like Cameron Design House, creators of bespoke lighting pieces; and Colbourns, who create hand-tufted carpets and rugs, to bring a vision to life. There’s also a desire for longevity in what the studio strives to create for each project. ‘The decorative elements may change over time, but I want the skeleton to have a beauty and a consistency to it that will last.’

As with anything bespoke, sometimes the initial concept and the finished product aren’t aligned. A drinks cabinet created for a client is one example cited, where the team had to replace the interior fabric lining the cabinet to allow for an increase in functionality. ‘If it’s never been done before there are occasions where it may need to be altered. There’s a risk there and it needs investment.’

Ultimately, each piece’s level of customisation will be determined by clear communication and guidance through the bespoke design process. Charu makes a point of ensuring her clients understand why select pieces in Elicyon’s collection have a certain price point behind them.

‘We have explained to clients the differences in producing various materials – for instance, hand-cut leather, versus laser-cut leather; specialist materials, timbers and veneer. Some of our clients really care about those smaller details, like the hinge on a door – it’s a talking point for them. For others, those details don’t matter.’

Considering the relative youth of Elicyon – the studio is celebrating its fifth birthday this year – its portfolio of projects to-date is impressive. As well as the formative One Hyde Park refurbishment, the team is working on a 30,000-square-foot penthouse apartment for a family in Dubai; a boutique hotel in Sri Lanka, which is its first hospitality project; as well as a new residential development in China. It’s evident that Charu’s dynamic background, coupled with the expertise of her team, is driving results for the business. She’s excited about the future and believes that the youth of Elicyon is advantageous in allowing for an agile approach with little restriction.

‘There’s no investor and there’s no driving force other than to create exquisite projects. It allows a certain dynamism and flex; you know, we’ve turned down projects that may have been very lucrative, financially, but weren’t right for our team.’

As well as the milestone of moving to a new, larger office and showroom in Kensington Village with her 21 staff, Charu has also been able to enlist professional services like PR and legal as the business has grown, something she values as an additional soundboard for ideas-sharing. Charu refers often to her team as the most important resource for her business, which is reflected in how she went about naming the studio. Contrary to her experience at other design companies where the name on the door was always the name of the principal, Charu’s belief that design is a collective experience with an emphasis on collaboration saw her take a different approach.

A portmanteau, or combination of two words, Elicyon comes from the phrase ‘Elysian Fields’, which describe a place of bliss; and ‘Halcyon’, referring to a time when things were wonderful. It perfectly encapsulates the Elicyon ethos, to evoke a feeling.

As Charu sums up, ‘for me, it’s always been about creating spaces where time and place stand still, and to capture that moment.’