Christian Nelson: ‘It’s all about doing a really beautiful job’ 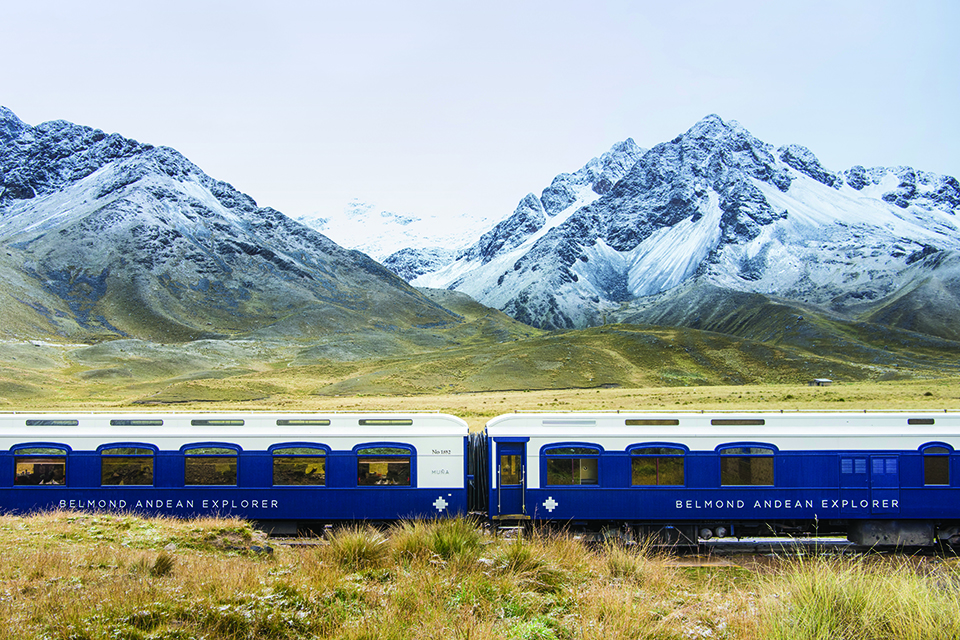 Founded by Christian Nelson, Nelson Associates is a luxury-brand design consultancy creating projects for some of the world’s most prestigious brands. He speaks to Imogen Smith about the studio’s individual design touches that make a lasting impression.

Amid the clamour caused by rail disruptions across the UK, there is a beacon of hope in the world of locomotives. Albeit on the polar-opposite end of the spectrum, Belmond’s first luxury sleeper train in South America launched last year. Adding to the brand’s existing bevy of steam engines, The Belmond Andean Explorer is the ultimate rail experience, weaving through the Peruvian Andes and journeying over 300 miles from Cusco to the white city of Arequipa.

Imagining what this experience might look and feel like, you would probably conjure up a scene from an Agatha Christie novel. Staying true to historical references, it was down to luxury-brand design consultants Nelson Associates to imagine a brand message that was attuned to Belmond’s heritage while resonating with the discerning, worldwide travel cognoscenti.

As company Founder and Creative Director Christian Nelson explains, ‘We really want to, in all our design projects, help build a brand so that it feels as strong now as it does hopefully in 20 years’ time.’

Starting from scratch, the London-based firm was appointed to design elements of South America’s first luxury sleeper train, including its brand identity and logo, interior signage as well as the name generation of the train’s carriages. After initial research, Christian and his team focused on elements of Peruvian history to give their creative thoughts context. As Christian says, ‘With the Belmond Andean Explorer, it was very much about understanding what the space was providing passengers, and really understanding Peruvian culture.’

Injecting these elements of the past into the project, the newly designed logo was born out of ‘literally going back as far as we could in terms of the country’s history and trying to tap into something that we thought could make an interesting design statement’.

The result is based upon the Inca Cross, or ‘chakana’, which represents heaven, earth and the underworld and is a symbol that has appeared in Peruvian architecture for centuries. Building on its commitment to create a bespoke brand identity for each of its projects, it was on board the Venice Simplon-Orient-Express that Nelson Associates created menu collateral — among a number of other pieces of on-board communication — to reference each of the trains’ restaurant cars.

‘We designed and produced these menus for the dining cars, which have now become collectibles,’ says Christian, who illustrates how the design touches feed into the experience. ‘Customers really love when the Executive Head Chef Christian Bodiguel comes out at the end of the meal and signs all the menus.’ This combination of design and service enhances the journey on-board and serves as a keepsake that guests can take from their time on the train. In addition to more nuanced references to design, Nelson Associates sought to create an identity for the unique Belmond Andean locomotive, by injecting subtle design touches into the signage and collateral on boardthe historic train. The result is a cleverly mastered body of work, combining Nelson Associates’ acute eye for detail with a mix of cultural heritage, adding to the guest’s backdrop for a very vibrant journey through Peru. Of the design, Christian says, ‘we wanted the aesthetic of The Belmond Andean Explorer to embrace modernity, making it appealing to a younger audience’, showing that now more than ever, it’s vital for brands to adapt accordingly to the culture shift taking place within the luxury market. Arguably, a challenge that is further tested in light of recent reports stating that millennials — a key demographic in the luxury sector — are hungry for wellness and culture and favour meaningful journeys over cheap and cheerful holidays.

In addition to Belmond, Nelson Associates also counts superyacht designers Olesinski, Threadneedles Hotel and Villa Azur Miami among its project portfolio, which is testament to Christian and his team’s rational approach to design. ‘A massive part of the creative process is being able to articulate the reasons behind it and this is what we try to achieve with our clients,’ says Christian, who started the company 10 years ago operating in Surrey, before moving to a studio in London.

Today, Christian and his wife work together alongside a team of designers, but as Christian insists, ‘there are no plans to expand’, because ultimately, ‘it’s all about doing a really beautiful job for our clients’. Drawing on his experience as a graphic designer, Christian finds creative inspiration within art and photography, including German photographer Andreas Gursky’s architectural compositions. When he was younger, Christian looked to British graphic designer Peter Saville, who ‘was someone who was really trying to push the boundaries in graphic design’. Today, Christian wants to continue the momentum that fuels Nelson Associates’ design work and partnerships. ‘It’s a nice place to be when you’ve got people asking you to do good work and it’s for interesting brands,’ he says. Right now, the design agency is working on a number of projects across Asia, and earlier this year, it unveiled the global brand identity programme for Belmond. With plenty of works already in the pipeline, Christian says that further into the future ‘we still want to work in the luxury sector but potentially look to work in other areas outside of hospitality, property, travel and leisure’.

Oliver Tomalin, LOVE BRAND & CO.: ‘We love our clothes and love the planet too’

Joss Kent, andBeyond: Can travel be a force for good?